‘To kiss or not to kiss’ is not a very original title and certainly been used by many bloggers and writers alike, but it actually is a serious question when you have decided to pack up and move country or even when visiting friends or loved-ones who have undertaken the expat journey and might introduce you to the locals.

Being a European citizen is interesting in itself with all the different languages, but what might seem normal in one culture can be totally not done in a neighbouring country. Living in Spain comes with its own challenges and to kiss, how to kiss, or not to kiss is one of them. With such an array of nationalities flocking to the Spanish coasts you can easily be forgiven to get rather confused. 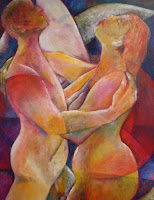 I am Dutch and in Holland we do not kiss when we meet someone the first time. A friendly handshake and a smile is a more common way of greeting. However, when you get to the next level and become acquaintances, friends, or are members of the same family, kissing the cheeks will be normal and three is the number of kisses exchanged.

Having been living in Spain for over twelve years I have become used to kissing total strangers when I am presented by someone I know … two kisses are the norm. I usually end up doing the air kiss whilst receiving a wet or not so wet kiss on my cheek. In a business situation the very first meeting might be a handshake, but when you walk out of the door, don’t be surprised to get two kisses as that is what happened to me a few months ago when I sealed the deal with a printer in Granada, who I had never met before and who is taking care of the print of my latest book about La Herradura, ‘Reflections from La Herradura’. Luckily he is a handsome fellow!

I personally am not sure whether there is an ‘official’ side to start the kissing, but I usually start on the left. This can sometimes be a challenge – especially when presented to an old, more or less toothless goat shepherd – as there is always that fear that we do not start on the same side and end up planting a kiss full on the mouth, followed by awkward laughter and trying not to wipe your mouth too obviously.

I also have a lot of friends and acquaintances from other nationalities, among others many British but also German, Italian, French and 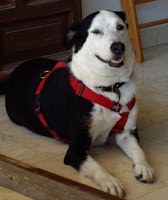 people from Scandinavian countries. The habits of kissing vary as some like to give 4 kisses; some just kiss once, but many people kiss twice, including the Spanish – and it is even common for men in Spain – as it is in many Mediterranean countries – to kiss each other in public when they meet up, and should you visit my home, my enthusiastic dog Choppy will try and greet you with a French kiss… a nice slobbery one.

So kissing in Spain can be an adventure and finding out specific rules and regulations seems to be a hard task. My advice: just go with the flow and see where it leads, or … go for a hug! Yes a hug, as this is something that seems to become more and more accepted and normal; a hug instead of a kiss when greeting someone you know! Most of my friends and people I have met several times hug so I get my fair share of body contact. I never re 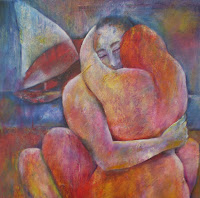 ally think about the intimate character of pressing my body against the body of another male or female, it is just nice to connect. Curiously, the kiss is not necessarily used when you are hugging someone.

And who cares anyway… in this world of anger, hate, war and so many awful events it is simply nice to hold someone for a few seconds, allowing your heart to greet and connect with the heart of your fellow hugger.

The artwork in this article and the story itself are by artist and writer Renate van Nijen who is also the initiator of this webmagazine.